A fascinating op-ed by Linda Greenhouse in yesterday's Times points out that Congress has delegated to one man (or, hypothetically, one woman) an enormous amount of unreviewable power, including the sole authority to appoint judges to the Foreign Intelligence Surveillance Court (much in the news these days) and to a surprising number of other important judicial bodies.

Greenhouse first looked into the issue because of reports that the current Chief Justice, John Roberts, has filled 10 of the FIS Court's 11 seats with judges nominated by Republican presidents.  (Only current life-tenured federal judges are eligible to serve on that court.)  But, as she discusses, the issue is much bigger than the FIS Court or John Roberts.

We tend to think of appeals-court judges, and particularly Supreme Court Justices, as effectively sharing power with other coequal judges or Justices on the same court:  Roberts can't unilaterally impose his will in deciding a case because he needs at least four other Justices to go along with him.  In a strikingly large number of instances, however, Roberts (or any other Chief Justice) can in effect unilaterally impose his will, by deciding who will serve on other important judicial bodies created by Congress.  And, unlike with most Presidential appointments -- which must be confirmed by the Senate -- the Chief Justice's decision of whom to appoint is entirely unreviewable in these cases.

We can't blame Roberts or any particular Chief Justice for this (although we might wonder why 91% of Roberts's appointments to the FIS Court apparently share his own political party).  The blame lies with Congress, which repeatedly has followed the path of least resistance by delegating to someone else the responsibility of filling these important positions.  Not that Congress should be in the business of making every special-court appointment itself by legislation -- that would be way too cumbersome.  But to delegate huge swaths of that authority to a single official (the Chief Justice) is dangerously irresponsible, especially given the increasing longevity of any given Chief Justice's tenure.  (Roberts himself, now 58, was only 50 years old when he assumed office in 2005.  There is every reason to expect him to serve for another 20 years at least -- that is, until 2033.  That's a long time in which to exercise the sole discretion to choose members of the FIS Court and other judicial bodies.)

Is there a better alternative?  This is a discussion that's just beginning, but here's a tentative idea:  a single panel of sitting federal judges charged with making appointments to these other special courts and judicial bodies.  The panel's members could be nominated by the President and confirmed by the Senate, like other high-ranking officers.  Each could serve for a limited term, with the terms initially staggered so that the panel's membership would turn over gradually.  There are weaknesses in this proposal, of course, including the problem of securing appointments by Senate confirmation in today's polarized political climate.  But the notion of a single panel with rotating membership to make these appointments seems superior, to me, to the current default mode of simply letting the Chief Justice do it.

Much debate about the institutional role of the Supreme Court centers on the constitutional requirement of lifetime tenure, which can't be changed without a constitutional amendment.  The vast appointment authority of the Chief Justice, though, is a problem created solely by Congress, and so it's a problem that Congress can and should fix.
Posted by C.J. Peters at 9:57 AM 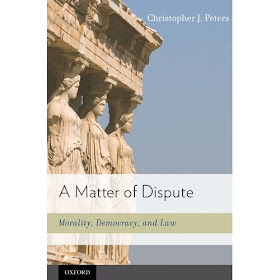